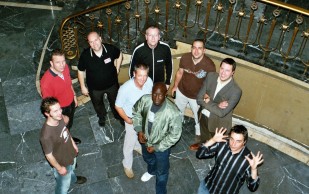 INTENSIFIED has been fortunate enough to share a stage with dozens of bands and singers, from Jools Holland to an authentic Zulu choir, including most of the contemporary ska favourites around the globe: Hepcat, The Slackers, The Aggrolites, The Toasters, Tokyo Ska Paradise Orchestra… 2 Tone stars such as The Selecter and Bad Manners … and original ska and reggae legends from the past and present, including Prince Buster, Jimmy Cliff, Laurel Aitken, Desmond Dekker, Dennis Brown, Phyllis Dillon, Morgan Heritage and the originators, The Skatalites.

The band has also had the pleasure of working on stage with Jamaican greats such as Rico, Dennis Alcapone, Dave Barker, Winston Francis, Pat Kelly, both Alton and his son Chris Ellis, and more recently headlining the London International Ska Festival with Stranger Cole, and shows in the UK and Europe with The Clarendonians.

With two BBC sessions at Maida Vale studios under their belt as well as being subject of their own documentary ‘Come Forward’, INTENSIFIED has firmly established its place in the history of UK Ska & Rocksteady.

The band remains standing defiant against a sea of pop, punk and other modern interpretations of original Jamaican sounds, not against progress or to put up musical limitations, but to continue sharing the pure, untampered and uplifting styles with the world. The sheer energy and irresistible dance beat within the original ska and reggae forms are eternal and INTENSIFIED proves that it does not have to be turbo charged to have the whole crowd dancing, singing and smiling all night …